Research Can Be Dangerous: A Cautionary Tale

The Confederate statues on Monument Avenue in Richmond, Virginia, came tumbling down. For this author, that meant a scene rewrite and a research trip. I didn’t expect the trip to end in the ER.

In my recently released story, Laughing Can Kill You, Hazel Rose investigates the murder of an obnoxious writer given to laughing at others’ expense. In one scene, Hazel and her cousin Lucy attend the victim’s memorial service, hoping to ferret out who killed the man. The service is held in one of the stately homes on Richmond’s Monument Avenue.

Here’s my thumbnail description of the area:

Statues memorializing notable players in the Confederacy punctuated Richmond’s Monument Avenue. The statue paying homage to African-American tennis star Arthur Ashe lent an incongruous note to the lineup of Civil War monuments. Various groups clamored for the removal of the monuments that they considered reminders of slavery and racism; other groups believed removing them was tantamount to erasing history. A grassy mall divided the wide avenue, lined with trees and architecturally-significant houses.

If you’ve kept up with events of recent years, you know that the statues (except for the Arthur Ashe one) were taken down in 2020 and 2021, amid a flurry of protests, acts of vandalism, and government orders. But Laughing Can Kill You is set in 2018, when the statues were still in place. So I was okay? Right?

Maybe not. Would my readers be aware it was 2018? While it was clear to me, it may not be to them. Plus, the statues are still a hot-button topic, regardless of one’s position. I’m not looking to get readers riled, I simply want to give them an enjoyable story.

Monument Avenue is not important to the plot, but I could hardly feature it in a scene without mentioning the famous statues that give it its name. Talk about the proverbial elephant in the room. Street, rather. So I needed a different, but similar, location. It didn’t take long to come up with a Plan B: Richmond’s Northside, just ten minutes from Monument Avenue.

Here’s the description that replaced the Monument Avenue one:

The Hermitage Road Historic District on Richmond’s Northside started life as a streetcar suburb in the late 19th century. Developing the area north of the city to solve the housing problems caused by a rapidly growing city population became possible with the invention of the electric streetcar. The trolley line ran down the middle of Hermitage Road. At some point, a wide, grassy median replaced the line.

It was a beautiful Saturday in May when I drove to the Northside to scope out the area for sights, sounds, traffic patterns, etc. to add authentic detail to my story. I had a house in mind, a Colonial Revival I’d visited on a long-ago walking tour of the area. It was similar to the Monument Avenue house and I could use the same interior details. 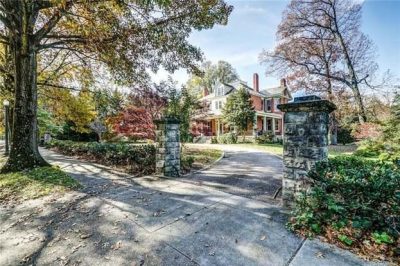 I walked down Hermitage Road and what do I see in front of the house? A “For Sale” sign!

I started to cross the street, thinking I’d get a better picture of the place from a distance. I hesitate to take pictures of people’s houses, feeling I’m invading their privacy. If challenged, I could say I knew a prospective buyer. Or I could offer a copy of Laughing Can Kill You when it came out. That should certainly appease them.

I looked around at the other houses, at the trees, flowers, taking in the scene, framing photo shots.

No photos were taken. With all my looking around, I didn’t look where I was walking. In an instant, I fell off the curb, landing splat on my shoulder.

When I picked myself up, my arm felt fairly useless. Thinking—hoping—that I’d only suffered a bruise, I decided to go home and ice my arm. But some persistent voice buzzing in my ear said “Go to the ER.” My guardian angel? Where had she been a moment before? Why hadn’t she grabbed me by the hair and pulled me back from that nasty asphalt? Oh well, God and angels work in mysterious ways.

At St. Mary’s Hospital (incidentally, it’s on Monument Avenue), I learned that I had a fractured shoulder. I went home with a spiffy sling that accessorized my wardrobe for six weeks. Luckily, it was my right shoulder and I’m left-handed.

Back to my rudely interrupted research trip. As the Colonial Revival was on the market, there were plenty of pictures of it online. The owners were asking a cool million. I bet you know what I’m going to say next—that I purchased the place! Um, no, but I did find lots of beautiful interior and exterior pictures.

Shortly before this unfortunate incident, I’d written a scene where Hazel trips over a crack in a sidewalk and uses balance skills she didn’t know she had, avoiding a spill. Hazel is like me in some ways (except I don’t investigate murders) but apparently I’ve given her better balance and coordination skills.

My original plan was to end the research trip with a latte at The Beanery, a fun and funky coffeehouse on Richmond’s Southside. Hazel and Lucy got to enjoy that treat after the memorial service. They needed to compare notes on what was becoming an intriguing investigation.

Laughing Can Kill You came out at Thanksgiving. My shoulder is healed. All is well.

There you have it: my cautionary tale on the perils of research.

Laughing Can Kill You

He who laughs last, laughs longest.

When romance author Hazel Rose is dropped by her publisher, she sees herself heading down a path strewn with has-been authors. While disappointed, Hazel won’t give up without a fight—she signs up for a mystery-writing class, thinking that crime fiction will jumpstart her career.

But what’s a mystery-writing class without a mystery? So when Randy Zimmerman, an obnoxious classmate given to laughing at others’ expense, is murdered, Hazel tackles the case. Solving a real-life murder will surely lend authenticity to her creative writing.

She recruits her book group pals to help with the investigation. Trouble is, there are more suspects than they bargained for—even Hazel herself, who endured Randy’s thumbs-way-down review of her writing, had a motive.

A second body drives the stakes higher, and Hazel doubles her efforts to find who’s behind the murders, unearthing secrets that a killer would go to any lengths to keep hidden.

Will Hazel succeed? Or will this be “The End” for her?

You can use this link to purchase the latest book in the series or click here. If you have ad blocker on you may not see the Amazon link:

Maggie King is the author of the Hazel Rose Book Group mysteries and short stories set in Virginia. She is a member of the Short Mystery Fiction Society, International Thriller Writers, James River Writers, and is a founding member of the Sisters in Crime Central Virginia chapter. Maggie lives in Richmond with her husband, Glen, and cats, Morris and Olive. She enjoys walking, cooking, travel, film, and the theatre. Visit her at MaggieKing.com.

Disclosure: This post contains links to an affiliate program, for which we receive a few cents if you make purchases. KRL also receives free copies of most of the books that it reviews, that are provided in exchange for an honest review of the book.